In 2020, the entire trial site was sown to a conventional wheat crop. The 2021 season was the first year in which different systems were sown at the site and the individual systems are therefore considered to be in their first year of transition.

The site received a total of 363mm of rain in 2021, with 249mm of this falling in the growing season. This amount was well above average for the region however very little rain in August and September as well as some severe frost events lowered the sites yield potential. There was no significant difference in yield between the three canola systems (Regenerative Cropping, Agtech Cropping and District Practice) with yields between 0.67t/ha for the TT canola in the Regen Cropping systema to 0.75 t/ha for the Roundup Ready® Canola in the Agtech Cropping system. The Roundup Ready canola, which was later maturing, was significantly impacted by frost and water stress.

Wheat yield in the Continuous Cereal system was below average at 1.55 t/ha when compared to historical site yields which has been attributed to high ryegrass pressure in these plots.

Hay yield (Oat and vetch hay) from the Agtech Livestock system was variable between plots however an average yield of 4 t/ha was measured. Feed quality tests are being conducted on cored samples from the bales, but initial observations of the material suggest it’s of a very high quality.

There was no significant difference between any of the canola treatments for any quality specification and the systems would have made either CAN1 or CAG1 grade at CBH. The wheat had low protein however did have good seed size and low screenings and would have made ASW1 grade.

The oat, vetch and tillage radish mixed pasture in the Regenerative Livestock system and the serradella and sub clover legume mix in the Permanent Pasture system produced high quality feed with good digestibility and key nutrients.

The regenerative livestock plots had a large amount of biomass in early spring and provided 14 grazing days to flocks of 9 merino hoggets one each plot, which equates to a stocking rate of approximately 60 sheep/ha. Permanent Pasture plots were only grazed for a 3 day period to reduce ryegrass seed set as serradella and sub-clover had already reached the flowering stage. 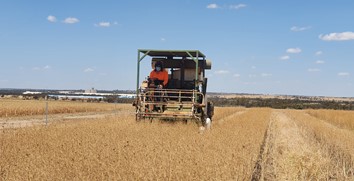 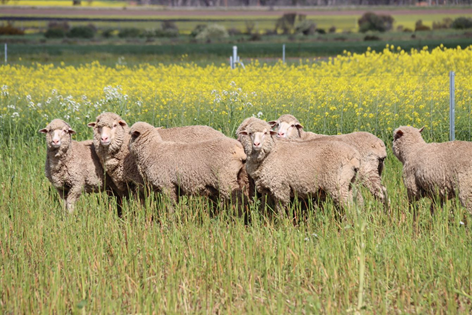 Neutron moisture probe access tubes have been installed across the site and will be used to monitor soil moisture at depth to understand how the different systems may influence the water holding capacity, infiltration and plant water usage.

A number of groups have visited the Climate Resilient farming systems site with project members presenting on each occasion. This has included the GRDC Western panel, the Soil and Land Conservation Council, the AAAC and multiple DPIRD researchers and teams throughout the year. The site was also used as an engagement point with 106 high school children during the ‘: PRIMED for Careers in Ag’ – agricultural career immersion day held in Merredin. Other forms of industry engagement such as presentations at external events, interviews and press releases were undertaken by the project team to continue building on this engagement.

Following approval by the Animal Ethics Committee and extensive work by the team and contractors installing infrastructure, sheep arrived on site to the trial site in August. The sheep have been used to graze some trial plots and will play a more significant role in 2022.

This season allowed us to take initial soil samples to be analysed on soil biology. DNA analysis of these samples showed little biological DNA below 10cm at the site. Initial observations from this data show that the DNA present was predominately bacterial and archaeal dominant, and a small fraction of free-living nitrogen fixing bacteria was detected. Now that each system has been implemented, we will continue to use in field and lab analysis to observe how soil biology changes under different scenarios.

The biostimulant trial adjacent to the long term trial compared biological amendment treatments that included either a commercial biostimulant or an on farm compost extract compared to different rates of fertiliser on the production of wheat. Observable differences in crop growth between treatments was generally related to fertiliser rate rather than biological amendment with the district practice treatment (full rate of fertiliser with no biological amendment) generally performing the best in plant growth measurements. The highest yielding treatment was the compost extract treatment which yielded approximately 100kg higher than all other treatments however this was not statistically significant. These results will be written up in more detail in a separate report.

Activities to be conducted prior to Seeding 2022

A number of key activities will be conducted prior to seeding this year, including:

Important disclaimer
The Chief Executive Officer of the Department of Primary Industries and Regional Development and the State of Western Australia accept no liability whatsoever by reason of negligence or otherwise arising from the use or release of this information or any part of it.